Create an Account - Increase your productivity, customize your experience, and engage in information you care about.

The 6 life-sized terra cotta busts in the lobby are sculpted in adobe clay and are life-size busts of early Saddleback Valley landowners.

Land Grants
Laguna Hills is built on one of the major land grants developed during the Rancho Era. Following Mexico's independence from Spain in 1821, those who had served in the government or who had friends in authority, were given vast lands for cattle grazing. Three of these landowners were Don Juan Avila, John (Juan) Forster, and Jose Serrano. The 3 men owned Rancho Mission Viejo, Rancho Los Deschos, Canada de los Alisos, and Rancho Niguel, which covered much of the western portion of the Saddleback Valley. Busts of these 3 initial landowners now sit in the alcove to the left of the Civic Center lobby.

Drought Devastation
In 1862, a drought devastated the valley and the 3 initial landowners lost their properties to the bank, where they were purchased by Lewis Moulton, Richard O'Neill, and Dwight Whiting. These owners used the ranches to raise sheep and cattle. They also grew olive trees, grape vineyards, eucalyptus, and crops such as alfalfa. In the Civic Center lobby, life-size busts of these men sit on the right.

Learn more about the Sculptors, T.J. Dixon and James Nelson. 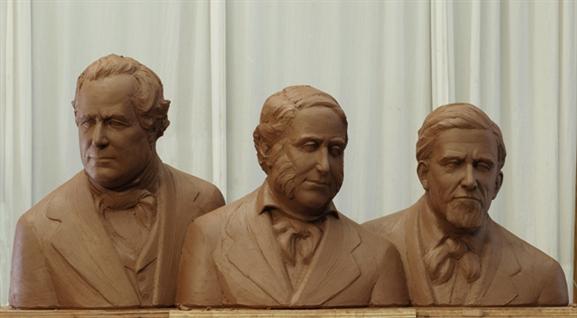